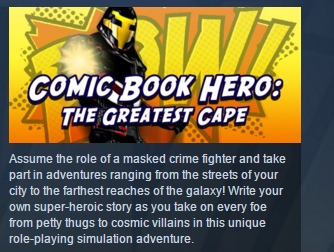 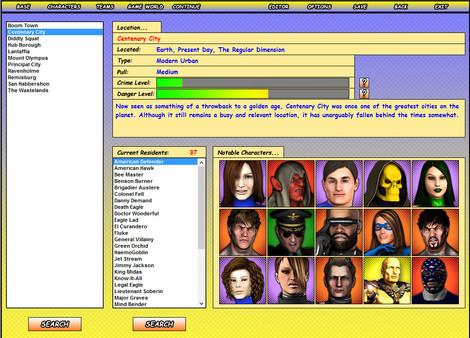 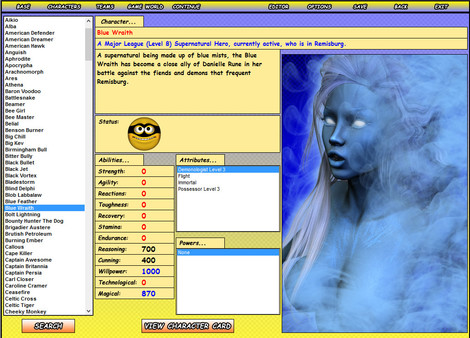 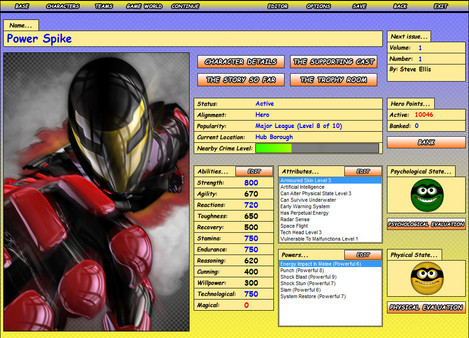 SteamMarket® information about the seller and his items
offlineAsk a question

What would you do with unlimited power? Would you become the greatest hero the world has ever seen or make the world tremble at your feet? Find out how your super-powered career would really unfold in Comic Book Hero: The Greatest Cape! Assume the role of a masked crime fighter and take part in adventures ranging from the streets of your city to the farthest reaches of the galaxy! Write your own super-heroic story as you take on every foe from petty thugs to cosmic villains in this unique role-playing simulation adventure. Adventure awaits you!

Create a custom hero to guide through a crime-fighting career, from origin story to climactic battles!
Customize your perfect hero by choosing from hundreds of superpowers, abilities and attributes.
Choose one of four game modes. Create your own hero from scratch, develop a hero from a selected backstory, take on the role of an existing hero, or clone a hero’s abilities and create a new story!
Take on opponents one on one or in team battles as large as 10 versus 10 in turn-based, strategic combat!
Foil evil schemes by fighting off henchmen, solving puzzles, and unmasking villainous masterminds!
See how popular your crime fighting adventures are with comic book fans! Your adventures are chronicled in in-game comic books. The more exciting your adventures, the better your issues sell!
Stay prepared by gathering information with the innovative “Word On The Street” feature.
Manage your character´s relationships with allies, villains and civilians.
Protect your character´s secret identity fiercely or choose to tell your closest allies.
Join a team for adventures or even start your own heroic alliance.
The in-depth editor allows you to customize the game world. Everything from a character´s powers to the locations in the game world can be customized.
Create your own game world from scratch and design a complete comic book universe of your own!

1. You need to download and install Steam http://steampowered.com/download/SteamInstall.msi
2. Go to your account or register a new one.
3. Go to the "My Games" and select "Activate via Steam ...", and enter the key received after payment.
4. Once activated, the game will appear in the game list (Library) and you can download it